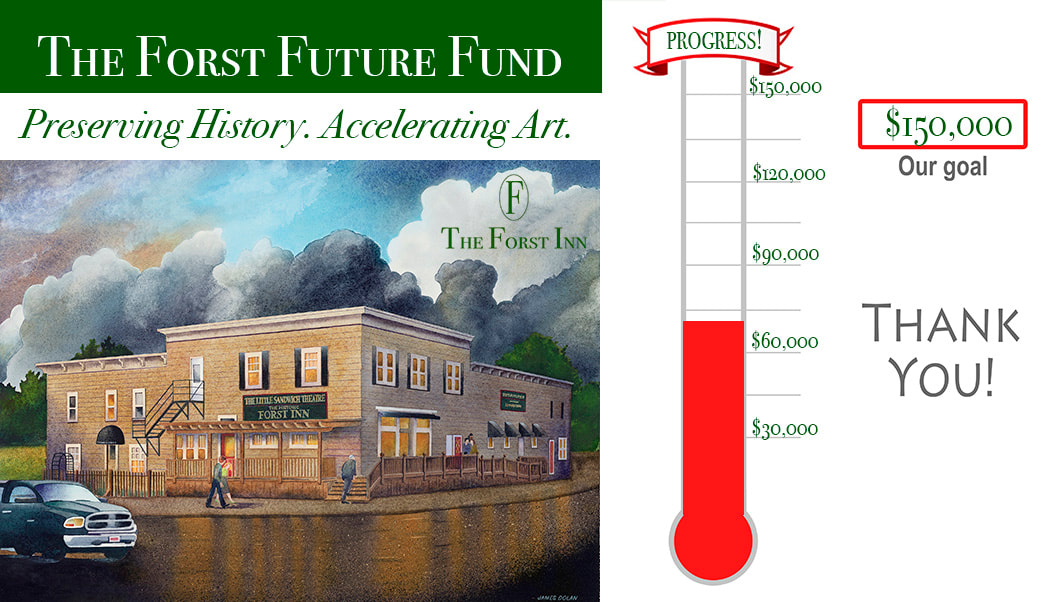 Arts organizations depend on the participation and generosity of their communities, and The Forst Inn Arts Collective is no exception. We are committed to nurturing rich and diverse cultural, educational, and artistic experiences while maintaining and preserving its historic setting in Tisch Mills.

The Forst Future Fund is our primary fundraising campaign. With an overall goal to raise $150,000 over the three calendar years 2019-2021, this campaign will ensure that The Forst Inn Arts Collective will be properly supported to meet its mission in the community.

After two years of operating and with our recently approved 501c3 status, we have reached a turning point where it is essential for us to establish a dependable and supportive patron base to go with our growing community of artists and audience members. In that spirit, we would hope that you take the time today to choose to participate in our Forst Future Fund campaign. Whether you have contributed in the past or this would be your first time, now is the moment to show your support!

A Little History and background

The Forst Inn was established in the early years of Tisch Mills around 1868. Vaclav Forst was among the bohemian settlers that arrived in the area in the 1850s, and it is possible that he was among those who established the Forst Hotel and Saloon. Since that time, the Forst has been a center of hospitality and entertainment for the region. From 1920 through 1990, the Forst featured local music and events in its dance hall. In 1990, Ron Kaminski converted the dance hall into a theatre and produced plays and presented music on the Forst Stage until eventually closing around 2012.

Catherine Egger and Michael Sheeks established The Forst Inn Arts Collective and re-opened The Forst Inn in September, 2017. Since then, the Forst has been a busy hub for a diverse offering of performance and visual arts. In just 21 months, so much has happened:
* Over 5,800 patrons have attended over 200 ticketed events.
* Local and guest actors presented fifteen different theatrical productions.
* Almost 20 ticketed music events featured a wide range of musical genres.
* Over 20 different visual artists have had work displayed in the art gallery.
* Over 50 different musicians have performed at Music in the Pub.
* Over 60 different actors have performed in plays.
* Over 40 different people have volunteered at events and performances.
* Over 75 individuals have contributed in support of The Forst.
* Numerous special presentations in theatre, arts, film and culture.

YOUR SUPPORT ALLOWS US TO...

preserve the historic aesthetics of the Forst Inn;
provide artists with the resources and support needed to inspire, entertain and edify its patrons;
provide a space for artists to retreat, reflect, and develop;
and pursue programming and events to create and sustain a community of artists and patrons into the future.

How Can You Participate?

You may make your pledge as an annual installment, but perhaps you would be best able to participate in our monthly giving program. In this way, a modest monthly contribution can add up to a significant pledge. A pledge as low as $10 per month helps immensely and for as little as $28 per month you would be a Guardian Patron.

TO MAKE A PLEDGE, you can fill out the form using any of the buttons below. Your two year pledge can be paid in two installments (half now and half in January 2021) OR you can use the monthly sustaining payments to create a pledge. A monthly payment of just $25 is the equivalent of a $600 two year pledge...so it is easy to make a big impact with a relatively small amount!
Monthly Sustaining Pledge
If you would prefer to simply make a one time contribution to The Forst Inn Arts Collective or to set up a monthly contribution without making a specific pledge to our three year campaign, use these buttons!
Make a One Time Donation